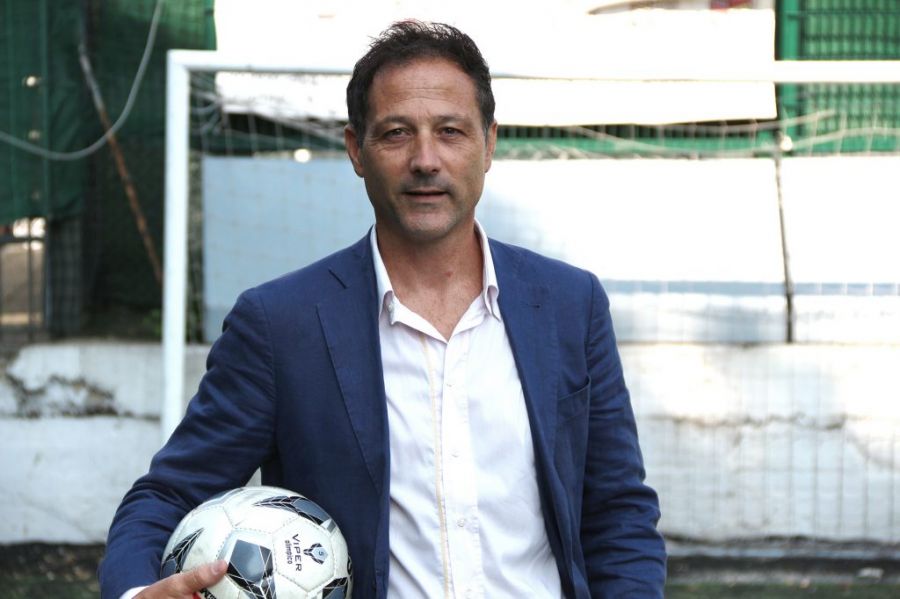 “To have the possibility of becoming a champion, or not to be one. It’s a phrase in which I deeply recognise myself, because it reflects the reality of the land where I was born and raised, Calabria, as well as the whole of southern Italy. There are no great opportunities there, especially for young people, there are no opportunities to express themselves and emerge. This is the difference, having the chance to become a champion, in football as in any other activity. I cannot guarantee the young people I represent that they will become champions, I would be telling lies. But I can, I want to give them the chance to do it.

That’s right, Vincenzo Catera. You sit down to talk about football – and he knows a lot about it – and you find yourself talking about roots, about possibilities, about dreams, about life in the round. Round like a ball. The clouds in which we lose ourselves in reasoning are, always and in any case, those that gravitate around a football pitch. Synthetic turf, natural grass, or beaten earth, with humps and potholes, as is almost always the case in the south. Those pitches where the young Catera first became a player, then a coach and a talent scout.

My activity of scouting, consulting for professional clubs and representing young talents stems from my personal experience as a footballer,” explains Catera, who made it all the way to the Serie C with the Catanzaro shirt, “and from a life project. Many times I have seen young people with good natural qualities who only needed opportunities to improve their training, to be known and to become established players. Amateur clubs, especially in the southern regions of Italy, do not always have the opportunity to interact with professional clubs and thus offer promising youngsters what they need to reach the highest level. The skills and training of a player are the sum of natural qualities that must be perfected, then enhanced and used to the best advantage. That’s how my life project came about: to help young people grow from a sporting and human point of view, advising them to work in state-of-the-art facilities, academies and clubs, and then to propose them to the football that counts, to become professionals and make their dreams come true.

Vincenzo Catera began his work with young people in 1994, in Calabria, as an instructor and coach. The first turning point, the most important one, came in 1999, when he moved to Turin: here Catera honed his skills as a ‘football instructor’ by working with the Turin International Soccer School and training a very talented group of young players including Amauri, Cacia, Sarli and many others who went on to become professionals. Once this fruitful collaboration was over, Catera continued with his coaching activities, in the most prestigious clubs in the Turin area (where he coached youth teams and first teams and also acted as sports director) and ‘on his own’ with individual lessons. In particular, he worked for a decade with Scuola Calcio Gabetto, the most important youth sector club in Piedmont at the time. In the city of Juventus and Torino, Catera found the right environment and was able to collaborate with amateur and professional clubs at the same time (not only Juve and Toro, but Pro Vercelli, Novara, Alessandria, Cuneo…), constantly involved in friendly matches and tryouts.

But Vincenzo Catera’s sphere of action is never local. His scouting activities extend to the whole of Italy, with a network of collaborators who monitor the best promising players in all the regions of Italy and organise selection meetings. And all over Italy the same young players can go and play, thanks to friendly contacts with all the clubs in Serie A, Serie B and Lega Pro.

So far Catera has coached almost a hundred youngsters who have made it to the professional ranks. Some have gone on to win a World Cup, like the young Ringhio Gattuso, who was followed on an internship in Calabria. Some to live a career as a bomber between Serie A and Serie B, such as Daniele Cacia, who he coached for a long time and who remained bound by a deep friendship with Catera: ‘We often talk to Daniele, he is a friend. In addition to a great character, he has an incredible talent, and in my opinion he could have done even more in his career, if he hadn’t been injured at the decisive moment, when he jumped into Serie A.” Between Serie B, Lega Pro and Serie D there are many other youngsters who have been followed for a few training sessions, who have grown on an ongoing basis or who have been managed directly up to the ‘jump’ into professional football: “If I think back to when I started working with youngsters in 1994, it’s been a long time… And we’ve come a long way…”.

Over the years, he has also developed many partnerships, both in scouting activities – one name for all: Christian Manfredini, former Chievo and Lazio winger – and with clubs to whom he proposes players ready for professional football: of particular note are the scouting activities carried out by Catera for Livorno and Barletta. For Vincenzo Catera, working in the world of football and helping young people achieve professional success is ‘a boy’s dream come true’. Do you know what the secret is? Never be satisfied, never feel you have arrived, never sit back and admire what you have done, but always look to the future. If the youngsters discovered by Vincenzo Catera have the same ambition, the same courage and the same ‘hunger’, it will be easier to make it to the pros. And more dreams will come true.

Write us an e-mail to get more information